In December of 2002, after 3 years working at the local video store in Queenstown (a job I loved as it confirmed me as a lifelong film geek), I convinced David and Amanda from Nomad Safaris to hire me as a driver/guide. I had no experience, but possessed a passion for Lord of the Rings and a good banter (says me!).  They figured I was worth a shot.  I initially worked two years at Nomad Safaris, before running off to Australia for a couple of years. When I returned to Queenstown, I came back to Nomad and worked another 3 years, both as a driver/guide and in various other roles. I can honestly credit Nomad Safaris for giving me both the love of the tourism industry, and a solid grounding in what it takes to be a professional tour guide, both on the road and behind the scenes.

Nomad Safaris began operation in 1988, running Land Rover tours into Skippers Canyon and Macetown. The current owners, David and Amanda Gatward-Ferguson had been operating tours in the same area since 1994 and bought Nomad in 1997. Only 2 years later, Peter Jackson decided to film some of the most spectacular scenes from the Lord of the Rings trilogy in the remote areas around Queenstown – areas Nomad visited daily. Fast forward to today, and Nomad runs a fleet of 16 Land Rover Defender & Toyota Land Cruiser 4WD trucks on a variety of tours in the remote back country around Queenstown. 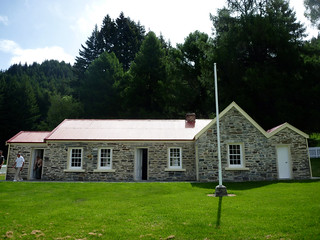 The original tours offered by Nomad Safaris are still among my favourite things to do in New Zealand. The road to Skippers Canyon is frequently named amongst the most beautiful, dangerous and/or scary roads in the world. With that in mind, it is best to let a professional driver do the hard work so you can sit back and be awed by the views. The ride itself is fairly gentle back-country roads, nothing I would call extreme 4WD unless you choose to go in winter. Snow, Ice and mud on the roads means that even the mighty Land Rover Defender needs chains on all 4 wheels to make the journey at that time of year. The payback is that you will get some incredible photos and have the place almost to yourself (and the guides love it!).

Macetown is a gold mining ghost town about 16km from Arrowtown. The road comprises about 25 river crossings each way, with some truly hair raising fords (crossings) at certain times of year. The stories of the miners who lived and worked in here from the 1860s relate the harsh conditions they were forced to endure in pursuit of the gold which was so abundant in the area. As well as the incredible history and beauty of the area, I would consider this to be a real 4WD tour, with challenging driving and a bumpy ride. It’s good to be aware of that before booking as not everyone can handle 4.5 hours of bumpy roads. 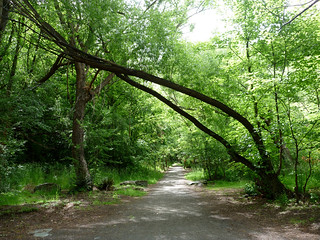 Safari of the Scenes is a pair of tours that visit locations used to shoot the Lord of the Rings trilogy (and other films). For those with limited time in Queenstown, the Safari of the Scenes – Wakatipu Basin offers a great overview of the area while including elements of both the Skippers Canyon and the Macetown tours. You will hear behind the scenes stories from filming and the local gold mining history, climb the Remarkables mountains, and see the A J Hackett bungy site at the Kawarau River.

Those with more time, or the really keen film buffs will be more interested in the Safari of the Scenes – Glenorchy, which takes you to the head of Lake Wakatipu and into the mountainous and forested area known as Paradise. On top of the Middle-earth locations, you will also visit Canada and Narnia, as scenes from X-Men Origins:Wolverine, and The Chronicles of Narnia: Prince Caspian were shot in this area. 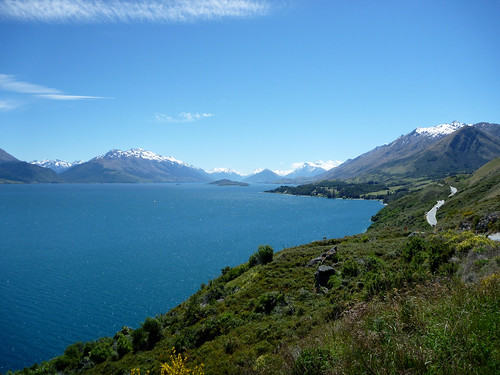 The road to Glenorchy

One tour I did less frequently but enjoyed immensely was the Nomad Quad Safari.  This is a self drive ATV tour on Queenstown Hill, and it offers some of the best views in Queenstown. The activity begins with training to ensure all riders are up to speed. Once training is completed, riders follow the leader over a series of trails that are matched to the rider’s ability. This is not a gung-ho thrill ride, with speeds kept relatively low and a focus on safety and scenery.  I only did this tour as a tail guide, as the lead guides had more experience and better training than I did.

Of course I’m biased, but I feel every trip to Queenstown should include a trip with Nomad Safaris.  They offer a great way to get away from the crowds and the gift shops, and to experience one of the world’s most beautiful and dramatic regions.

Watch this space, I will soon add a detailed outline of the tours mentioned above.

About the Author: Mike

This site uses Akismet to reduce spam. Learn how your comment data is processed.

Mike was referred by a friend /classmate who also used him when she went to CChurch.He is a very friendly,accomadating person and looks after welfare of his guests in order to enjoy and maximize the 3 days We booked with him.I totally relied on hi...

My Tweets
Go to Top